Hoping to inhale the perfect dab? While many cannabis consumers prefer their concentrates on the extra hot side, there are several great reasons to keep things low. For the most part, the optimal dabbing temperature falls between 330? and 390? (166 to 199?).

To successfully reach these temperatures, using a vaporizer or an e-nail is recommended. However, those relying on a torch have little control over the temperature range.

A few rules to keep in mind when using a torch include: heat the nail until it begins to turn red, give it about 7 to 10 seconds to cool, inhale slowly, and use a carb cap. You can also just heat a nail for about 5 seconds, and then dab.

A carb cap will help you make the most of your oil while attempting low-temperature dabs. Carb caps are also recommended for e-nails, which will give you far more precise temperature control when compared to a torch.

But, why exactly does dab temperature matter? Can temperature influence your overall high? Here’s everything you need to know about dabbing temperature.

There are a few different ways to dab. In some ways, dabbing is like a cross between vaporization and smoking. Low temperatures can vaporize cannabis concentrates while high temperatures will combust the oils.

With the standard e-nail, the recommended temperatures typically fall between 480 and 540? (250 to 280?). However, these standard temperatures will combust the oil and reduce the health and wellness benefits of the concentrate.

Heating concentrates over 400? means that you potentially burn off some of the active components and complex flavors present in the strain. While some enjoy the intense euphoria provided by high-temperature dabs, here’s how different temperature ranges stack up: 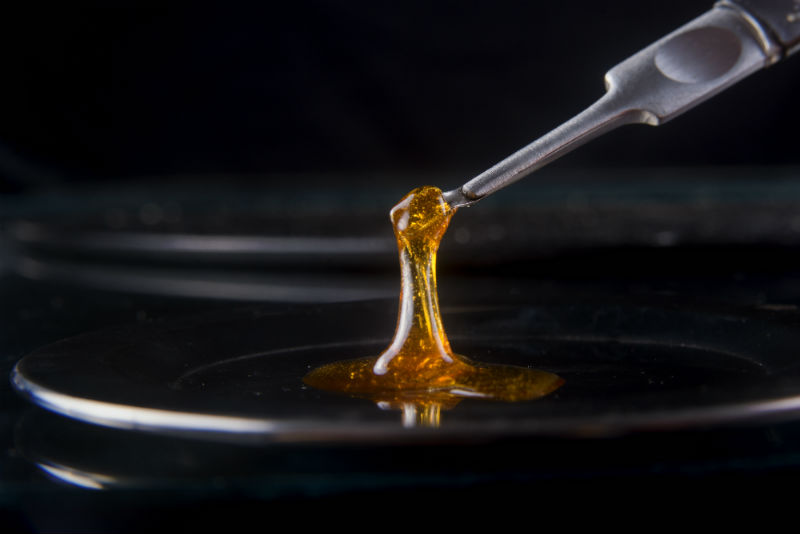 There are several benefits to low-temperature dabbing. While low-temp dabbing may not leave you as elevated as quickly, low-temperature dabs are more flavorful, less irritating to the tissues of the lungs and throat, and offer little risk of burning your cannabis oil.

Low-temperature dabbing also reduces the risk of inhaling toxic compounds that become present when cannabis oils are heated to high temperatures. Low-temp dabbing is more akin to vaporization, which is considered the safest way to inhale cannabis.

At low temperatures, you get a truer sense of the taste and overall effects of an individual strain. Some terpenes burn off closer to the 300? (148?) mark. The higher the temperature, the fewer flavors will be present in your concentrate. 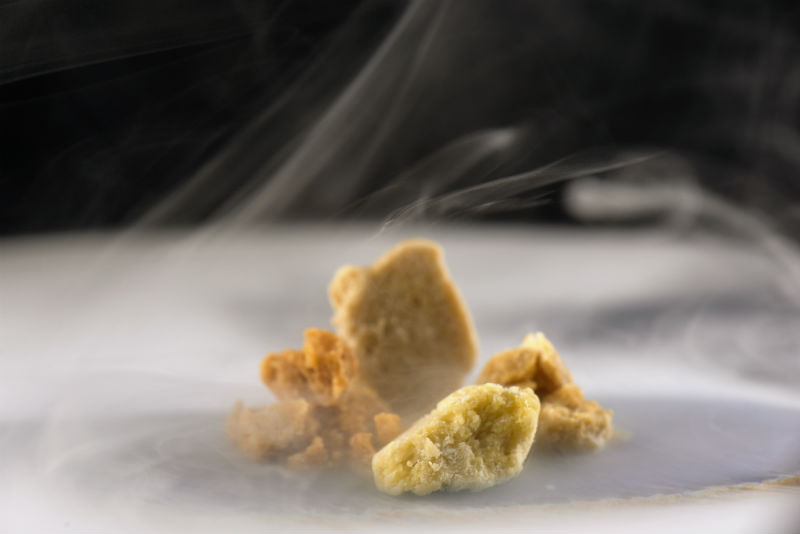 It’s not uncommon for plant and animal oils to become rancid when heated to high temperatures. Even oils commonly considered safe, like coconut oil, can release very small amounts of the toxin acetaldehyde when heated to 446? (220?). Acetaldehyde is a class-one carcinogen, meaning that it has been shown to cause cancer in the body.

With high-temperature dabbing, there is more of a risk of inhaling carcinogenic compounds like benzene and naphthalene. These compounds are created when plant oils are heated to extreme temperatures.

Back in 2001, the National Organization for the Reform of Marijuana Laws (NORML) and the Multidisciplinary Association for Psychedelic Studies (MAPS) teamed up to study the health effects of vaporization.

They found that while vaporizers successfully prevented benzene, toluene, and naphthalene from being released at a temperature of 365? (185?), these compounds became present at the 392? (200?) mark.

Dab Temperature: Does It Change Your High?

Apart from harshness and flavor, changing the temperature of your dab may even change your overall high. Whether you’re vaping a cannabis concentrate, taking a torch to a nail, or using an e-nail there are a few things to keep in mind with dab temperature. Here are three different temperature ranges and how they might affect your high: 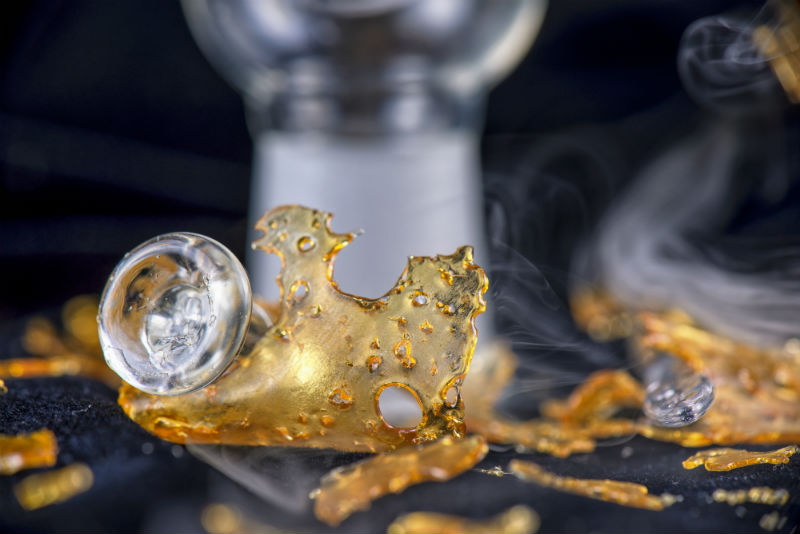 This is the optimal temperature range for a low-temp dab. This range is considered a vaporization range. You may or may not get a visible vapor at these temperatures. Rather, you’re more likely to feel heat on the inhale and get a nice blast of flavor.

Preheating the nail or vaporizer oven is recommended before trying to pull. At this temperature, it will take waxes and shatter some time to melt. To make the most of a low-temp dab, it’s best to take slow, deep inhalations.

The high from a low-temp dab will be very slight. While dabs tend to be stronger and seemingly more head-focused than dried cannabis flower, a low-temp dab can take the edge off without getting you a little too stoned. 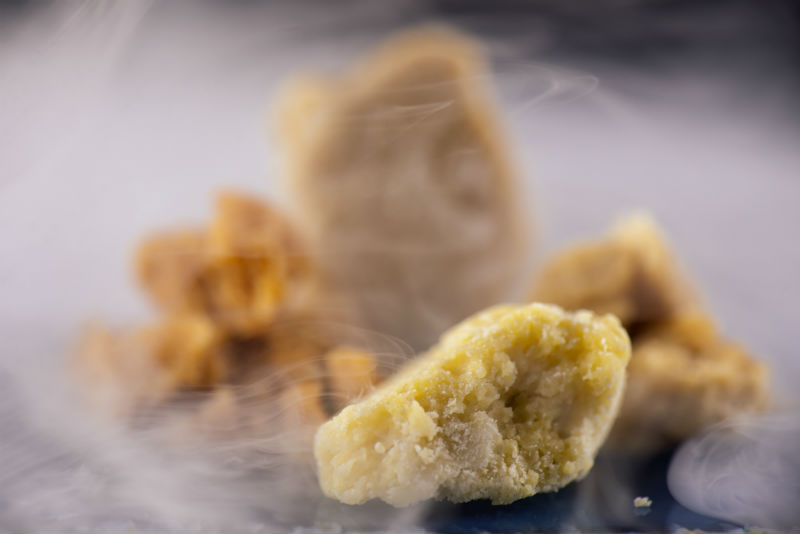 Heating cannabis products much higher than 390? runs the risk of burning the material. Combustion happens at 446? (230?), which is when you’ll switch from a process more akin to vaporization to straight up smoking. While some people might enjoy combusting their concentrates, it is not necessary for an enjoyable and lifted experience. 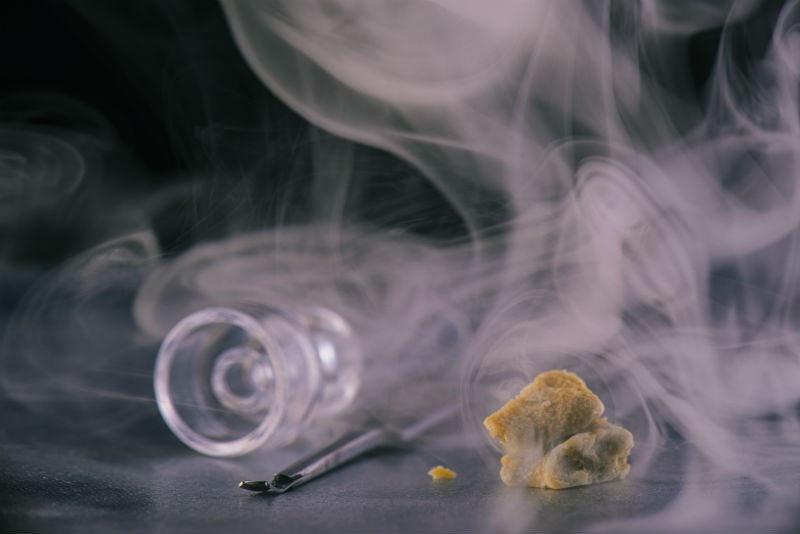 At this temperature range, there is a possibility that toxins like benzene, toluene, and naphthalene can be released. Dabs above 390? are considered high-temperature dabs. While high-temp dabs may be more harmful to the body, many consumers enjoy the experience more than low-temperature dabs.

Why? Because high-temperature dabs can get you lifted fast. High-temp dabs tend to hit very strong, providing a substantial psychoactive effect. While you’re more likely to get powerful pain relief and an intense euphoric experience from high-temperature dabs, there is no need to take a hit from a rig that is hotter than 400? or so.

Unfortunately, many dabbers love to heat nails to ultra-high temperatures, close to the 900 to 1000? (482? and up) range. While this may provide an intense and enjoyable experience, this increases the chances of burning your wax and inhaling toxic compounds.